EPEE was founded in 2005 and is since chaired by Jacques Hogard. Patrick Vaugien, his partner since the beginning, assumes the functions of Vice-President.

The historical financial partner of the EPEE Group, Rosario Financial, has been supporting the development of the company from the very beginning.

Since its creation, EPEE has had an Ethics Committee.

Former colonel in the French army, he served for 26 years. First as a paratrooper at the Foreign Legion and then at Special Operations, he took part in numerous external missions, whether in Africa, particularly in Rwanda in 1994, or in the Balkans. In 1999, he commanded the Joint Special Forces Group in Macedonia and Kosovo.

He came to civil life in 2000 and after an Executive MBA at HEC, he founded in 2005 the strategic intelligence company EPEE (Partner Experts for Business Abroad). In 2011, he subsidiaries the specific security consulting activities under the ESEI brand (International Business Security Experts). He is a graduate of CPA Paris (Center for Business Development).

Jacques Hogard is an officer of the Legion of Honor and holder of the Order of Saint Sava (Serbia). 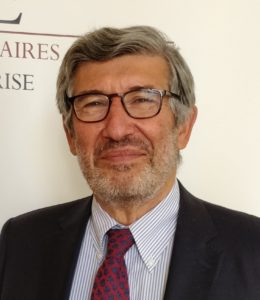 Former colonel in the French army, graduated from the Ecole Spéciale Militaire de Saint Cyr, from the School of War and Langues ​​- “O”, Patrick Vaugien has long worked for the Defense in the field of International Relations.

Since 1994, he has been conducting a civilian career. After a MBA at the IFG in Paris, he held various management positions, first as director of a subsidiary of CS (formerly Compagnie des Signaux), then as director of security for the BULL group, finally as Deputy Chief Executive Officer of Atlantic Intelligence.

He joined EPEE from its creation as Associate Vice President.

Patrick Vaugien is knight of the Legion of Honor

The purpose of the Ethics Committee is to ensure that our partners respect the founding values ​​of the company EPEE, as well as its ethical and deontological requirements in its approach to assisting the development of French and European companies internationally, inspired by an “economic patriotism”. The Committee is currently chaired by François Guillaume, former Minister of Agriculture.

The Ethics Committee is independent of any affiliation and any political objective.